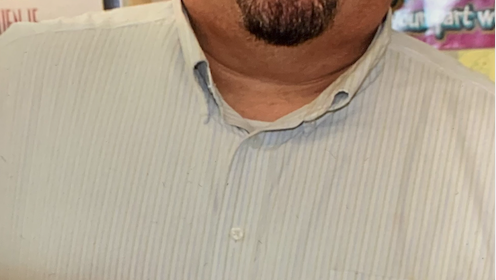 This month’s staff spotlight focuses on Mr. Ray Niemann, who teaches at both John Glenn and Southeast Academy. Mr. Niemann has been a teacher at Glenn for 22 years and has not lost his passion to help his students succeed in anything they do. I had the pleasure of interviewing Mr. Niemann and was able to get a true sense of how much he cares for his students.

When asked What is your favorite part about being a teacher? He was quick to express how much he loves the students. He would go on to explain that his love for the students encouraged him to be a part of numerous activities at Glenn throughout his teaching career. Some activities that Mr. Niemann has been a part of include ASB coordinator, Head Wrestling and Football coach, Athletic Director, Renaissance committee, TCAP, and ACE.

When asked if he always wanted to be a teacher? Mr. Niemann would explain that he went to school to become an archaeologist. However, it took a former high school teacher to help him find his love for teaching.

Mr. Niemann would express how he loves listening to classic rock, naming the group Journey in particular. He also said that one of his favorite all-time singers is Sam Cooke, sharing a connection to the song “A Change is Gonna Come.”

Mr. Niemann was asked what he loves to do in his free time? He smiled and answered that he loves to spend time and travel with his wife, be in the company of friends and family, and loves cooking barbecue. Also, he expressed that some of his favorite movies include Glory, The Green Mile, and The Godfather. Finally, Mr. Niemann expressed his love for Notre Dame Football and the Raiders as some of his favorite sports teams to watch.

Mr. Niemann was asked at the end of our interview: Any advice that you would like to give the student body at Glenn? Which he responded: “Don’t sell yourself short, and start developing a plan now to be successful in the future. This involves getting over roadblocks that present themselves, however do not be stopped by these roadblocks as they are steps to help you reach your goals.”

It was a great pleasure to interview Mr. Niemann, his passion and care for Glenn truly shows both inside and outside the classroom!